Beemster cheese is always of high quality. This delicious cheese is made from the creamy dairy that originates from the North Holland polder. This meadow milk is also full of proteins and minerals. The name Beemster represents a whole family of cheeses. Each cheese has a distinct taste, but all of them have that characteristic 'pliable' mouthfeel. 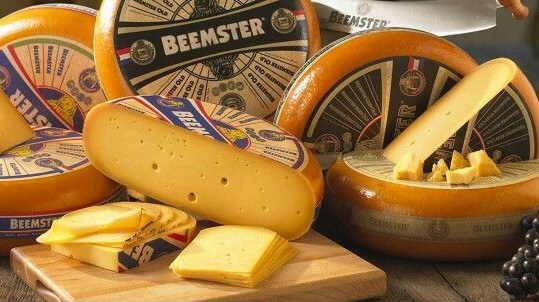 A delicacy from the Beemster polder

The ancient Beemster polder, where the Beemster cheese is made, has been on the UNESCO World Heritage List since 1999. The Beemster polder was drained as far back as the 17th century. The threatening inland waterway The Beemster was emptied out with a dyke of 42 kilometres and 43 windmills and converted into fertile and profitable agricultural land. Since then, many cows have grazed on these green meadows.

Winner of the Superior Taste Award

Various types of Beemster cheese were awarded the Superior Taste Award in Brussels in 2013 and 2014. The Beemster Royal, Beemster X-O- and the Extra Old Beemster cheese achieved an excellent score on scent, appearance, taste and texture. This award is a kind of Michelin star for drinks and food in the luxury segment.

The Beemster cheese has been made in a traditional manner for more than 100 years, with a great focus on the welfare of animals and nature. Only the best ingredients are good enough for Beemster cheese. The main component is North Holland meadow milk. 1 litre of Beemster cheese requires 10 litres of milk. Rennet and a starter culture are added to this. Because of the rennet, the solids in the milk, milk protein and milk fat will coagulate. This makes the milk thicker. The starter culture provides the taste and makes the cheese last longer.

De cheese master stirs
The thickened milk is cut into many pieces until only small, white grains remain: this is called curd. The cheese master stirs the curd by hand, creating an even 'bed of cheese'. This stirring is of significant importance for taste and composition. Finally, the small cheese particles are compressed in large round cheese vats.

Resting in a salt bath
After the cheese master has inspected the cheeses, they are allowed to 'rest' for two to three days in a brine bath. That is a kind of large swimming pool filled with salt water. In the bath there are even traces of the brine with which Beemster started in 1901! This ensures the unique taste. Because the salt infuses the cheese, the cheese becomes firm and tasty.

After the brine bath, the cheeses are placed on wooden planks and start to develop their own taste. Wood is very suitable for this because it absorbs moisture. The cheese can then ripen better. The cheeses must be regularly turned to keep the beautiful round shape. To develop its taste, a young Beemster cheese needs at least 4 weeks. After at least 4 months of ripening, a cheese can be called matured. At the right temperature and humidity, old Beemster cheeses can ripen for as long as 10 months. An extra-old cheese will remain on the shelves for 18 months. This gives the cheese a lot of extra character.

Powered by Magento 2 Extensions by Mageplaza